In 2013 India started using Neonicotinoid pesticides in order to protect a crop that Monsanto had promised the Indian farmer he would not have to use pesticides on. These are the worst pesticides in the world and they have been indicted for having killed billions of bees on the planet. I called a meeting of ICAR in 2014 to ask for the ban of these pesticides. ICAR refused, even though they admitted that the bee population has gone down sharply. They said cotton was more important than fruit, grain, and flowers which are dependent on bee pollination!

If the bees have gone down in number drastically, how has the honey production tripled? Till 2013 the yearly growth rate was only 0-4.8%. From 2013-14 the growth rate rocketed from 5.3 to 11.1 %. This could not have happened naturally. How have hundreds of honey companies come into the market? This question has always troubled me. I don’t eat honey.

Last month the environment magazine, Down to Earth, answered this question in a deeply detailed investigation that they took months over. You should read it. We do not take food adulteration seriously and yet it is the highest form of corruption and should have the death penalty on it. I will attempt to encapsulate what they have discovered, but again, I repeat, go onto their website and read the expose.

Let’s start with the basics:

Honey is eaten because it is known to be an antioxidant and has anti-microbial (killing germs) properties. It is expensive to create because thousands of bees have to be maintained and fed a steady diet of flowers. Sugar has no nutrient value and is known to add weight and cause chronic disease. It is cheap.

The FSSAI is the government organization in charge of food standards.

In 2017 the FSSAI ordered that honey should be tested for adulteration with corn, sugarcane, rice, and beetroot syrups. The test was called C3 and C4. The tests were isotope tests, SMR, TMR, foreign oligosaccharides tests, and pollen counts. In 2019, FSSAI mysteriously issued a directive revising, and downgrading, the parameters and allowing the adulteration to go undetected.

The Director of the National Bee Board told Down to Earth that he had written a letter to the government saying that by reducing pollen count FSSAI has legalized the practice of adulterating and selling rice syrup and corn syrup as honey. The cheating of the consumer, by honey processors, has been legalized “You can understand why”. By now the companies selling honey have increased massively and become very powerful. Baba Ramdev had jumped in as well. But strangely enough, the honey farmers were all going bankrupt because these companies had stopped buying their honey.

So, we have a huge honey industry that uses no honey? So, what do the “honey” bottles contain?

Sugar syrup imports into India from China have increased steadily. Fructose and glucose syrup was being imported from China to India in bulk amounts. In 2014, 10,000 MT came in. By 2017 it was more than 4,300 MT. These syrups are imported under the names of “Fructose syrup (F55/F42)”, “Honey blend syrup”, “Tapioca fructose syrup”, “Golden fructose glucose syrup”, even “Fructose Rice Syrup for Honey”. Anyone from India can look up the marketing portals like Alibaba, Okchem, and Tradewheel, and order from a host of Chinese companies.

The FSSAI issued directives to sugar importers saying they had evidence that this Chinese import was being used to adulterate honey. The FSSAI announced in 2020 that the Nuclear Magnetic Resonance Spectroscopy (NMR) was now mandatory for any company exporting honey (the Indian consumer is expendable, of course, so the standards for detecting adulteration in honey remained the low ones revised in 2019.)

Did the fructose syrup import stop? No. It simply changed its name.

The Chinese were not hiding their product. On all the large Chinese portals they were advertising a sugar syrup called the All-Pass Syrup. The advertisements claim that the chemical mixture, called syrup, can pass the honey adulteration tests – C 3, C4, TMR, SMT, Oligosaccharides, and even NMR!! Companies in India are importing this chemical mixture, which was being sent to India in some cases as “industrial raw material”, and even “paint mixture”, from China. 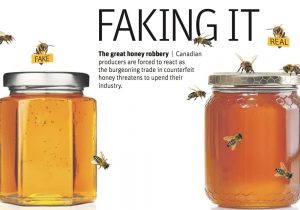 11,000 tonnes of this mixture have come in annually. Nasik, Uttarakhand, Uttar Pradesh, and Punjab. The factories that make this syrup are all “legitimate food processing businesses.” The FSSAI chooses to look the other way. Down to Earth ordered samples online from two Chinese suppliers called Wuhu Foods and CNN Foods. In their order, they specifically stated that they wanted this syrup to pass all the government tests. Both companies wrote that their product could pass any Indian tests, even if the adulteration was up to 80%, and added that their Indian clients used this percentage in their so-called honey bottles. The samples that Fedex brought in simply said “syrup” and “paint pigment emulsion.”

Down to Earth took pure raw honey and mixed it themselves with the Chinese and Indian adulterants (from a company in Jaspur) in different proportions – from 25% to 75% – and sent these to the Gujarat based lab Centre for Analysis and Learning in Livestock and Food (CALF) of the National Dairy Development Board. The samples passed all the tests up to 75% adulteration!

In August 2020, Down to Earth bought honey marketed by 13 companies and sent them to the same Gujarati Laboratory.

All the large companies passed the tests except for Apis Himalaya Honey (they probably put more than 75%!) Three of the smaller brands: Dadev, Hi Honey, and Societe Naturelle, failed and even the C 3 test showed that they had more than 20-27% cane sugar. All these three are labelled as Raw Unprocessed Natural Honey! But Down to Earth did not stop there. They sent all the brands for the gold standard test – the Nuclear Magnetic Resonance Spectroscopy Test (NMR). Dabur and Saffola have put it on their bottles that their honey has passed the NMR test.

There is only one testing point in India – the Export Inspection Council (EIC) in Mumbai. They refused to do the tests. So, Down to Earth contacted a well-known German Lab, which specialises only in honey adulteration tests including the NMR, and sent the samples – from the same batch that had passed the tests in Gujarat. They sent 17 samples from these 13 companies: Patanjali, Baidyanatha, Zandu, Saffola, Markfed Sohna, Nature’s Nectar, Dabur, Apis Himalaya, Hitkari, Dadev, Indigenous, Hi Honey, Societe Naturelle.

All the others FAILED – including Dabur and Saffola, who put it on their labels that their honey has passed the NMR Tests. This means only these three companies are selling us, pure honey. The rest are all massively adulterated with chemical sugar syrup. In any other country, these people would be in jail and the company would be shut down. The Down to Earth article is meticulous in its exposure. But FSSAI has ignored the expose.

During the COVID lockdown, people went all out to improve their health. Honey sales from March 2020 went up by 35%. But instead of making their bodies healthier, people were starting the day with shots of sugar syrup, which is just poison. Sugar increases the inflammation in the body, suppresses immunity, and makes the body vulnerable to disease, including diabetes, and Corona.