While speaking in her address in the Lok Sabha, TMC MP Mahua Mohita made some strong and bold remarks on the government of India and its governance. But what shook the house most was her comment on a former CJI of India made during her fiery speech in the parliament.

Mahua Mohitra was speaking on how the judiciary, a prominent pillar of democracy of India is not sacred anymore. She said, “Judiciary is not sacred anymore. Its stop being sacred the day a sitting CJI of India was accused of sexual harassment preceded over his trial, cleared himself and then proceeded over to accept a nomination to the upper house within three months of retirement”. In response, many MP’s from the treasury bench rose to hover her speech and started calling out to her for insulting the President and the democracy because she spoke against a former CJI of India.

Although, N.K Premchandran, MP from Revolutionary Socialist Party who was presiding the house said that any unparliamentary remarks will be looked after and corrected afterward.

But as per the latest reports the government has chosen not to suppress any motion against Mahua Mohitra as the legal opinion was in favour of TMC MP because she spoke about a former CJI who is not a higher authority anymore.

Remarking more on Judiciary Mahua Mohitra went ahead on a brave note and spoke about comedians being targeted repeatedly just for doing their job. She said, “Judiciary sits back as a mute spectator when our young are prosecuted for cracking a joke”. 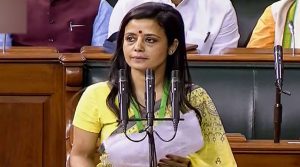 TMC MP, Mahua Mohitra not only gave her remarks on the judiciary but she also spoke on many important issues as well. Before starting her speech, she said, “As a parliamentarian, I want to use this privilege and platform to voice the citizen’s questions in the house today”. She quoted the words of American Journalist Elmer Davis on the USA “This republic was not created by cowards and cowards will not preserve it “, which she finds relevant to the contemporary situation of our country. Mahua Mohitra then gave her account of how she believes that whatever the government claims to be very courageous actions taken by them is nothing but unfair to the citizens of the country.

In her speech Mahua Mohitra alleged the government of India for writing the farm laws without consent and that it was tabled without scrutiny. She also called out to the Ministry of External Affairs for not using their platform for the benefit of the awareness and the benefit of the citizen. She said, “MEA are invested in responding to the tweets of 18-year-old climate activist and American pop star. Where no single ministry has deputed by this government to look out for the food, water and the basic sanitation needs for the farmers and their families who have been camping on the borders of National Capital for almost 90 days”.

Well, it was quite clear that Mahua Mohitra came to say it all in her address. And leaving nothing behind she finally called upon the Indian media saying that a very large section of Indian Media has plummeted to new depths both in terms of actual reporting as well as the total absence of journalistic ethics.