Yati Narsinghanand is again booked for his hate speech remarks during the Hindu Mahapanchayat sabha in Burari, New Delhi. He says that “50% of the Hindus will convert to Muslims in 20 years if a Muslim becomes a PM of the nation”. 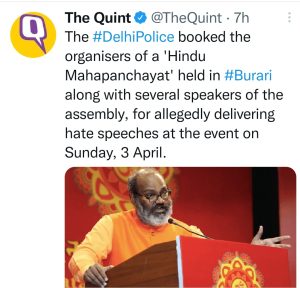 Details Of The Hate Speech Event :

As per police sources, Three FIRs are registered as they denied permission for the event. Yet the organizers continued with the event with 700-800 people. Not only that police have lodged FIR pertaining to fake and false media videos, and reports. As per police sources, many people are also using it as a tool to propagate their own hidden agenda. But till now no arrests are being done so far.

In Hindu Mahapanchayat organised today in Delhi by Jantar Mantar accused Preet Singh, Yati Narsinghanand asked Hindus to pick weapons. He said,"In 20 yrs,40% Hindus will be killed. If you want to change this, be a man. A man keeps weapons." This is violation of his bail condition pic.twitter.com/cEXh4xCf5z

The event was organised by Preet Singh of the Save India foundation. Earlier this man had been arrested for delivering a hate speech against Muslims at Jantar Mantar in Delhi. Yati Narsinghanand is out on bail regarding the Haridwar hate Speech matter. But his recent speech clearly shows that nothing much has changed. He says that in 2029 or 2043 or 2039, there are chances that this nation can have a Muslim PM. Once this happens then the future of Hindus is in danger and if you don’t want it to happen. Then get up with arms to take on the fight. He also addresses that “We Hindus should stop begging for our rights”. Then he says we got Ram Janmabhoomi by the court not by begging. S stop begging.

Why Hate Speech Are Lethal For Harmony?

Well, any religious book, teachings, person, or idol always stands for the betterment of mankind. But it has been seen that a section of people from the different communities of the same or different religion always tends to degrade one or the other. Such preconceived notions and false information always lead to social and religious friction. This friction is thus utilized by the political parties for their own benefits. Be it Hindutva or Hindutvawadi, Muslims Vs Hindus, OBC Vs General, etc. 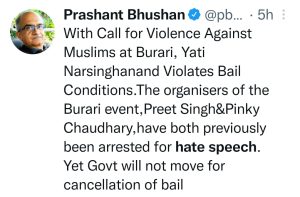 In the last few years, India’s political scenario is far more religiously vivid than ever before. Now the top leaders openly talk about promoting a particular culture and religion. Some of the recent examples include the Hijab controversy, Hate speeches in UP, Delhi where clear instruction for mass destruction of Muslims was called out.

Not only that, even the pandemic onset and spread were associated with a particular religion. Despite the fact that later court denied such allegations. It’s not new that minorities are neglected in our society as we believe in who wins the maximum share as if life is also a polling booth. But in reality, every person has the right to eat, drink, live and practice his/her religion as per choice and method. We all should stand for peace and humanity for a harmonious nation.