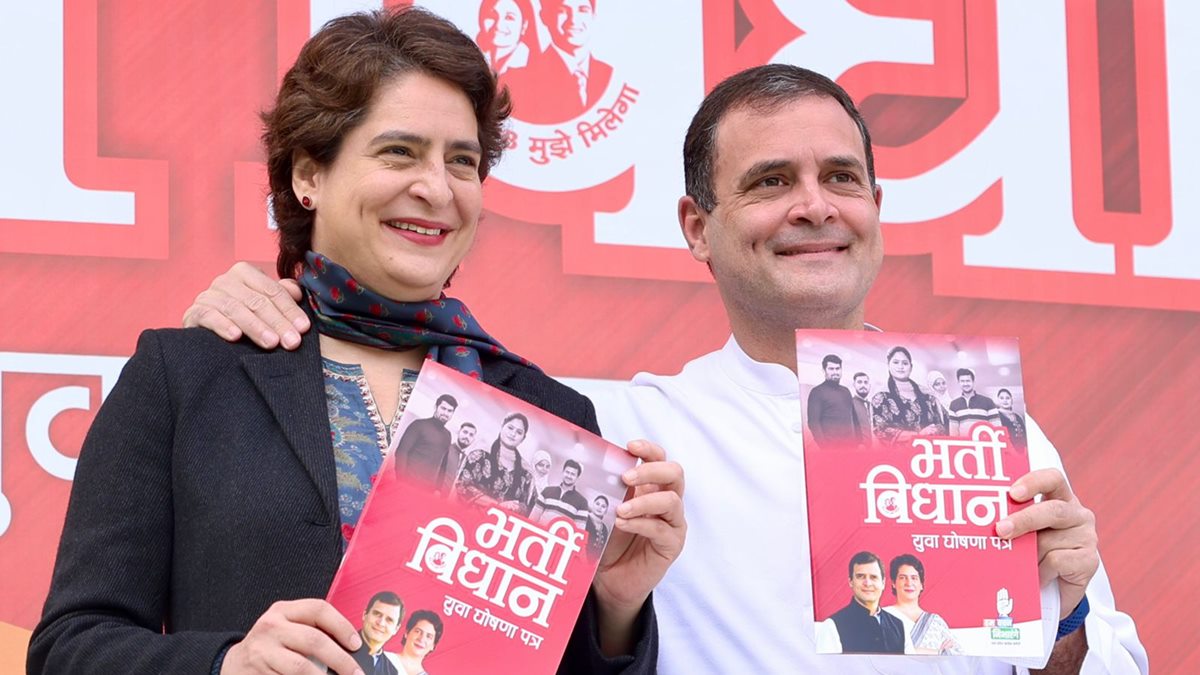 youth manifesto by congress ahead UP polls

Congress Party has launched its ‘Youth Manifesto’ for the UP Assembly polls 2022. Party leaders Rahul and Priyanka Gandhi launched the manifesto, which aims to start ‘a new vision of India’ with youth being at its centre.

The manifesto is also called the ‘Bharti Vidhan’. Rahul Gandhi said to bring the change, we have to start with UP first. He also said this is not a hollow promise as these promises are crafted after talking to common people on the grounds, especially with the youngsters.

“The youth in Uttar Pradesh needs a new vision and only Congress can give that vision to the state,” Gandhi said. He also added, “We don’t spread hatred, we unite people and we want to create a new Uttar Pradesh with the strength of youth.”

While addressing the press during the launch, Rahul Gandhi talked about the biggest problem of youth, which is unemployment.

“Forget job creation, today the youth has lost jobs. This is happening because all the work is diverted to 2-3 industrialists. So, Congress has decided to work on the creation of jobs,” he said. He also added that the party is not aiming at any targetted but is focusing on how to create jobs and work opportunities.

Priyanka Gandhi Vadra, the main leader of the Congress party in UP, was also present on the occasion. She said the party wants to focus on development and not on negative propaganda based on caste or communalism.

She further said today’s youth is qualified but not getting jobs. Not only this, they face so many difficulties in the process of examination schedules, delayed results, long waiting to join among other issues.

Both Rahul and Priyanka Gandhi slammed the BJP government, led by Yogi and Modi in UP. Both of them called BJP 2014 UP Vision a “complete disaster.”

Congress, in the last few months, has been actively involved in UP, especially under the leadership of Priyanka Gandhi. She gave the popular slogan, ‘Ladki Hoon Lad Sakti Hoon’. The party is keeping women and youth as the centre point of their agenda. Congress has reserved 40% tickets for women candidates in the UP assembly polls.