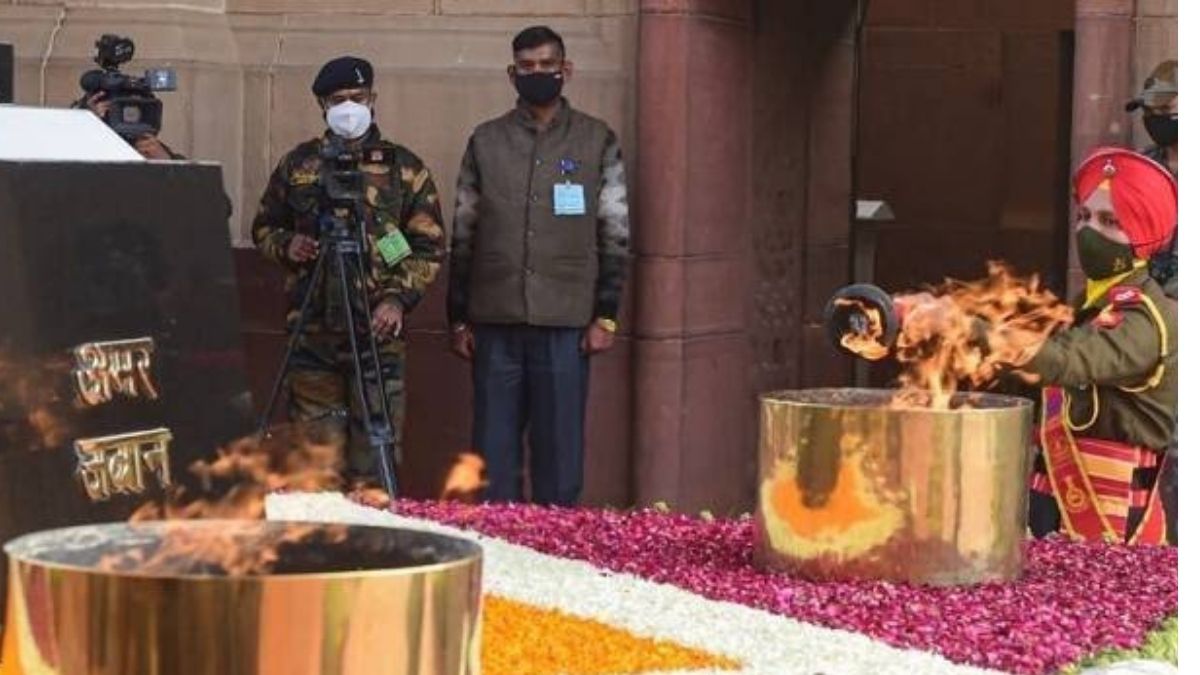 The Amar Jawan Jyoti, which has been burning for the last 50 years at the India Gate in the country’s capital New Delhi, has been merged with the eternal flame at the National War Memorial (NWM) on Friday. The memorial is located 400 metres from the India Gate. Integrated Defence Chief Air Marshal B.R. Krishna presided over the function.

Prime Minister Narendra Modi announced that a grand statue of Netaji Subhas Chandra Bose will be installed at India Gate on his 125th birth anniversary, as a symbol of the country’s ‘indebtedness’ to him.

The Amar Jawan Jyoti was established in the memory of the Indian fighters who were martyred in the Indo-Pak war in 1971 and other wars as well. It was inaugurated on 26 January 1972 by Prime Minister Indira Gandhi.

The Nation War Memorial has names of 25,942 martyred soldiers inscribed in golden letters. It was inaugurated by PM Modi on February 25, 2019.

Former Air Vice Marshal Manmohan Bahadur tagged the Prime Minister on Twitter and appealed to him to take back the decision.

“Sir, the flame burning at India Gate is part of the Indian psyche. You, me and people of our generation have grown over there cheering our courageous soldiers,” Bahadur said. He also said that while the National War Memorial has its own significance, on the other hand, the remembrances of Amar Jawan Jyoti are also inimitable.

However, former Lt Gen Satish Dua expressed satisfaction over the Centre’s decision. “As a person who played a position in the design, selection and construction of the National War Memorial, it’s my view that India Gate is a memorial to the martyred icons of World WarI,” he said.

He further added that Amar Jawan Jyoti was established in 1972 as we didn’t have any other memorial. The National War Memorial pays homage to the warriors who martyred in the war after the country’s independence and all the salutation formalities have formerly been shifted to the new memorial.

Former Lt Gen Kamal Jeet Singh said on Friday that after the inaugural of the National War Memorial, it’s imperative that both the flames unite.

A 1971 war veteran and former Chief of Army Staff Lt Gen JBS Yadav said, “I get it right. Now we have a war memorial and it would be right that the Amar Jawan Jyoti should be intermingled in the flame of the war honorary itself. Now, we should have only one National War Memorial. It’ll be a appropriate honour for all our soldiers who have been martyred from 1947 till present.”

Additionally, the Congress party also accused BJP of “removing history” by extinguishing the Amar Jawan Jyoti and merging it with NWM. “It is a matter of great sadness that the immortal flame for our brave soldiers will be extinguished today. Some people cannot understand patriotism and sacrifice – never mind…We will once again light the ‘Amar Jawan Jyoti’ for our soldiers,” said former Congress president Rahul Gandhi.