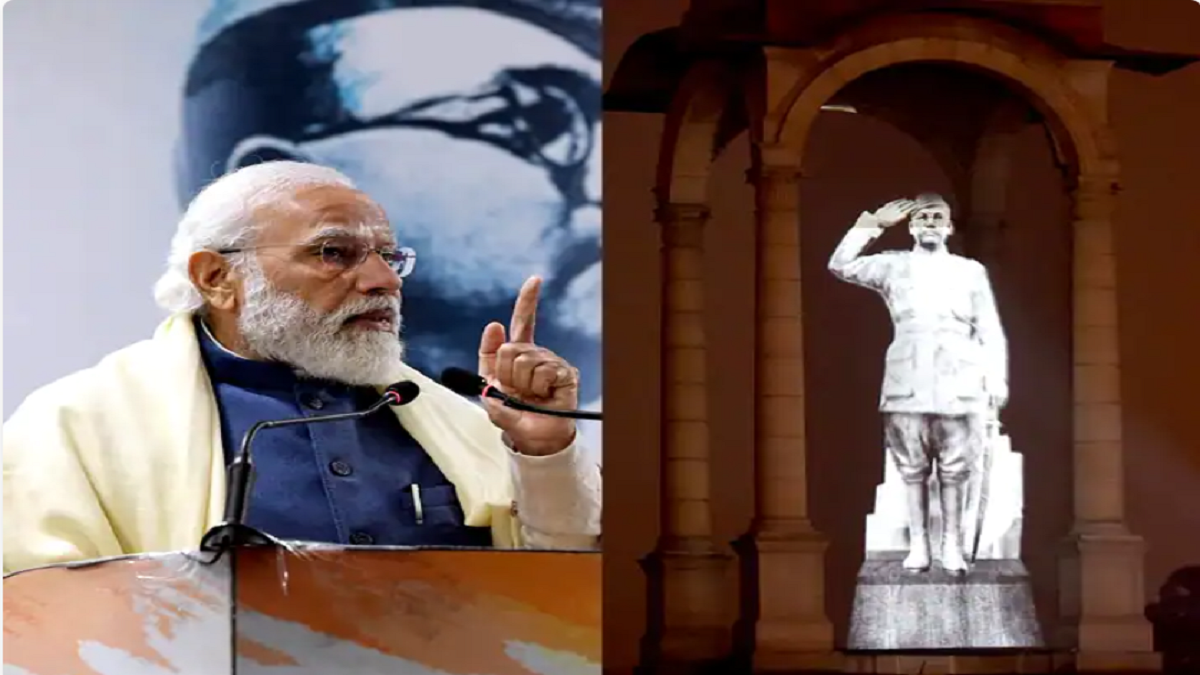 On the occasion of Netaji Subash Chandra Bose’s 125th birth anniversary, Prime Minister Narendra Modi unveiled the holographic statue of Netaji at the India Gate. Along with this, the Amar Jawan Jyoti, a memorial flame set up in 1972 by the then Prime Minister Indira Gandhi as a homage to Indian soldiers who laid down their lives in several wars.

The flame was moved to the newly constructed National War Memorial in India gate premises on Friday.

Before the inaugural of this holographic statue, Prime Minister gave this information regarding the statue’s erection at India Gate through a tweet. In this tweet, he wrote, “At a time when the entire nation is marking the 125th birth anniversary of Netaji Subhas Chandra Bose, I am glad to share that his grand statue, made of granite, will be installed at India Gate. This would be a symbol of India’s indebtedness to him.” He also posted images of the holograph and the proposed statue.

Since the announcement of the erection of Netaji’s statue at India Gate by the Prime Minister, there is a hurricane of thoughts emerging from the people of this country. While there is a huge crowd who is supporting and loving this decision of Prime and Minister and BJP. Meanwhile, there is a section of people and critics who is calling this move of BJP a publicity stunt and a smart move to win the upcoming elections of West Bengal that are supposed to be held after 4 years and deviate the public attention from the denial to the tableau proposed by West Bengal government.

Well, as we know, Mamta Banerjee led TMC beat BJP with a massive gap in the 2021 assembly elections, held last year. And now it seems that with that defeat, BJP has already begun preparations for the next Bengal elections. Now, BJP is all set to play every card in order to win the assembly elections of West Bengal.

So, here the BJP is with their masterstroke of winning the trust of Bengal. People of Bengal love Netaji and consider him as a fatherly figure. However, Bengalis were always furious at the governments of India for not considering the contribution of Netaji in the freedom struggle. And now when BJP is giving this huge respect to Netaji, don’t you think people out there will definitely start loving and supporting BJP for giving recognition to their father?

TMC Lok Sabha member Saugata Roy said, “Indira Gandhi had lit the Amar Jawan Jyoti after the 1971 Bangladesh War. Both flames could have been allowed. The BJP and the RSS had no contribution to India’s freedom struggle. The BJP wants to wipe out our history and present a distorted narrative”.

Roy further said, “It was an effort to divert people’s attention from the protest against denial to the tableau on Netaji that the Bengal government planned for the Republic Day parade in Delhi. The Centre could have allowed the tableau. They rejected it because of their narrow-minded politics. The Centre wants to erect the statue because the BJP has been exposed. It has no respect for our national heroes”.

Chowdhury said, “The BJP wants to distort every episode of history. The shifting of the flame is an insult to soldiers who laid down their lives. Similarly, the announcement on a new statue of Netaji is a hasty afterthought to divert public attention from the denial to the tableau. The BJP is doing politics with Netaji with an eye on elections”.

However, BJP is trying their level best to defend themselves and therefore, Shah tweeted, “This is a befitting tribute to the legendary Netaji, who gave everything for India’s freedom. Netaji is the epitome of India’s true strength & resolve. Congress has left no stone unturned to forget the immortal contributions of India’s brave son”.

Well, how well this tactic of BJP will work for them we will get a glance of it in the upcoming elections of Punjab, Uttar Pradesh, Uttarakhand, Goa, and Manipur.