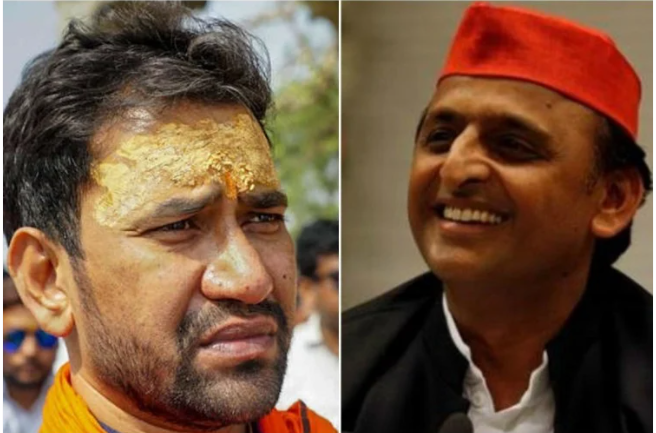 Now only a few months are left in the UP Assembly Election 2022. Before the UP elections, political agitation has intensified in the state. The era of allegations and counter allegations has started in the state. The round of leaders of political parties in the state is continuing to take a dig at each other. In this episode, Bhojpuri cinema superstar and Bharatiya Janata Party leader Dinesh Lal Yadav ‘Nirhua’ on Thursday took a jibe at Akhilesh Yadav and has fiercely targeted Samajwadi Party President Akhilesh Yadav.

Nirhua tweeted the video and said that, “brother, you have accepted it.. have taken respect and taken the self-respect of the Yadavs. Lord Krishna must have cried tears of blood too.. When you people killed Ram devotees in Ayodhya in the politics of appeasement. Those who hate Hindus being Hindus, chanting the name of Jinnah, are damned”.

On the other hand, this video of Dinesh Lal Yadav surrounding Akhilesh Yadav is becoming increasingly viral on social media. People are fiercely sharing this video of Nirhua on social media. Nirhua has also contested from Azamgarh in the 2019 Lok Sabha elections on a BJP ticket. He was fielded in the election against Akhilesh Yadav. Despite the Modi wave, he had to face defeat in this election. Although Nirhua has a good hold in Bhojpuri speaking districts. If media reports are to be believed, Dinesh Lal Yadav can also contest the assembly elections from Mau this time.

Also read: Xi-BIDEN Virtual Summit: A Quick Look At The Relevance And Takeaways

In the video, Nirhua said that you keep telling people like this that you belong to Jinnah’s ideology. If you get a chance, what will happen to this state and country? I know it.

It is worth noting that recently SP chief Akhilesh Yadav had given a statement regarding Mohammad Ali Jinnah. After his statement, a big issue of Bharatiya Janata Party was found in the UP elections. CM Yogi Adityanath had taken a dig at Akhilesh’s statement on Jinnah. BJP has become an attacker on him.