UK prime minister Boris Johnson got married in ultimate secrecy to his fiancee Carrie Symonds at Westminster Cathedral. Reports suggest that all the guests were invited last minute to the wedding ceremony at the cathedral. The guest list included all the high ranking officials from Johnson’s office who were also clueless about the wedding plans. However the spokeswoman for Johnson did not report on the news since according to Covid-19 restrictions, wedding guests should only include 30 people.

Around 1:30 Pm on Saturday afternoon the cathedral was suddenly shut down. The 33 year old  fiancee was seen exiting a limo wearing a long white wedding dress without any veil. One of the Downing street spokesman said that the wedding took place in a very small and intimate ceremony where only very close friends and family were among the attendees. 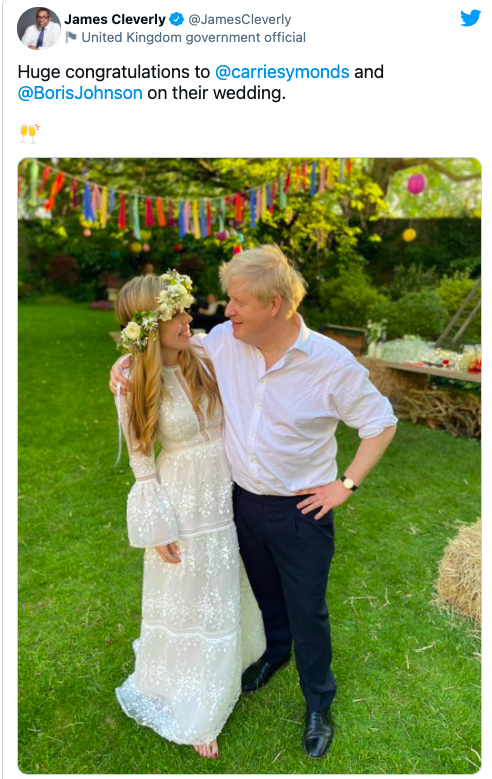 The spokesman also said that although their official wedding date was scheduled for July 2022, they would celebrate again. Their honeymoon is also put off till then. Johnson and Symonds have been living together since 2019, ever since Johnson became the prime minister. In 2020 they had announced their engagement and also shared the news that they were expecting a child, who was born in April 2020.

Just one photograph of the wedding has been officially released to the press and media following the ceremony. Post ceremony, several politicians have congratulated the newly married couple including home secretary Priti Patel, Vaccines minister Nadhim Zahawi and pensions secretary Therese Coffey. Boris Johnson became the first prime minister to get married while serving office after 200 years. Mrs. Johnson used to work in the office of the conservative party press office which she had joined in 2010. She later worked on Mr Johnson’s successful campaign to be re-elected as the mayor of London.

The couple had been romantically linked by the media since 2019. Mr. Johnson and his previous wife, Marina Wheeler, were married for 25 years before calling it quits in 2018.

Actor Joe Lara among 7 Presumed Dead in Business Jet Crash
Priyanka Chopra, Sushmita Sen, Swara Bhasker & Others Root For Joe Biden & Kamala Harris Post Inauguration
Priyanka Chopra Jonas Thanks Husband Nick Jonas For The White Tiger Praise And The Wine, Writes ‘Best Husband Ever’; Post Inside
Priyanka Chopra Gets Hundreds Of Roses From Nick Jonas, He Says They Are ‘Just A Few’: ‘I Love You To The Moon And Back’