KRK never fails to make headlines. Ever since he was seen in Bigg boss he grabbed the attention of everyone by his antics or violent behaviour. A couple of years back he turned into a self proclaimed film critic. Some sources claimed that his recent review of Salman khan’s film Radhe landed him into legal troubles. This claim has been confirmed by Salman Khan’s legal team saying that there is indeed a lawsuit for defamation against KRK.

However, it has nothing to do with his review of Salman’s movie Radhe, contrary to what the headlines had stated earlier. Salman Khan’s lawyers further clarified that Kamaal R Khan or KRK is being sued for alleging that the Radhe superstar is involved in fraud and money laundering through his NGO Being Human. The legal team also claims that KRK has spent several months spreading malicious falsehoods as an attempt to seek attention from Salman Khan. 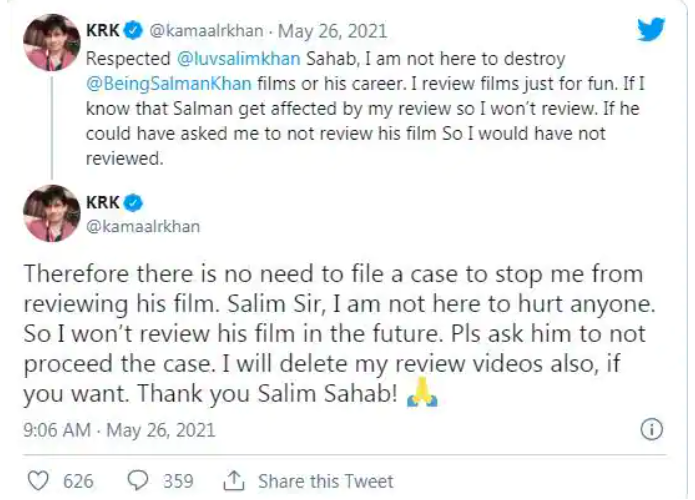 A statement on behalf of Salman Khan has been published that states “Kamaal R Khan has put out a series of tweets and videos alleging that Salman Khan has sued him for defamation because he reviewed the film, Radhe. This is incorrect. The suit has been filed as the defendant has been publishing and endorsing defamatory allegations, including that Salman Khan is corrupt, that he and his brand “Being Human” are involved in fraud, manipulation and money laundering transactions, that he and Salman Khan Films are dacoits. The Defendant has been spreading malicious falsehoods and defaming Salman Khan consistently over several months, clearly with a view to draw attention to himself.”

Mr. Khan’s legal team further clarified that KRK’s legal team told a Mumbai court today that his client will abstain from posting any ‘remarks of defamatory nature’ against that actor until the next court date. The controversy involving Sultan superstar and KRK blew up when Kamaal had posted on twitter a couple of pictures of the legal notice he had received from Salman Khan’s legal team.

He said he was being sued for his unflattering reviews of Radhe, the latest Eid release of Salman Khan. Following the lawsuit KRK even tweeted Salman Khan’s father, Salim Khan to take back the lawsuit and also that he would never review any of the superstar’s films.

Bigg Boss 13: Mahira Sharma To Get Evicted? “They Asked Me To Send Clothes & Denied It” Says Her Mom
Vikas Gupta Confirmed Sidharth Shukla’s Engagement With Shehnaaz Gill? Video for SidNaaz Fans
Interior Designer Spills The Beans On Kareena Kapoor Khan-Saif Ali Khan’s New Abode; Right from Taimur’s Own Living Space To A Nursery For The 2nd Baby
Jay Bhanushali Criticises Paras Chhabra And Mahira Sharma,“Sorry But Distributing Food Is A PR Stunt For So Called Actors” Pahira Fans Lash Out