Actor Emraan Hashmi took to Twitter to share the first poster of his upcoming release ‘Chehre’. Starring Amitabh Bachchan and Emraan Hashmi in the lead roles, ‘Chehre’ will be out on April 30.

The Rumi Jaffry directorial ‘Chehre’ poster features Emraan and Amitabh in the center stage on the setting to solve a mystery. The poster also features Krystle D’Souza, Annu Kapoor, Drithiman Chatterjee, and Raghubir Yadav who looks as intense as the lead actors.

But Rhea Chakroverty who is reportedly also starring in the film seems to be missing from the poster. Along with that, her name is also missing in the mentions in Emraan Hashmi’s tweet too. Earlier in July 2019, Rhea shared an image on social media from the set of ‘Chehre’ to confirm her involvement with the film. 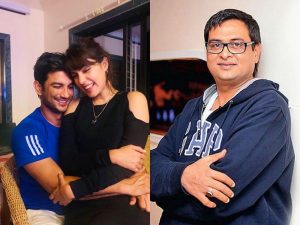 After the sudden death of actor Sushant Singh Rajput, Rhea was caught up in the controversy revolving around her late boyfriend’s death and also the allegations made by Sushant’s family on her. She was also arrested in a drug case involving Sushant’s death but is now released on bail. Rumi Jaffery who is also the director of ‘Chehre’ and also a close friend of Sushant and Rhea has not yet given any statement on the update on the subject. 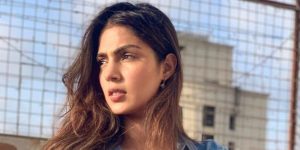 Though Rumi has been vocal about Sushant’s demise and has often spoken in defense of Rhea. “It has been a traumatic year for her. Of course, the year was bad for everyone. But in her case, it was trauma on another level. Can you imagine any girl from a well-to-do middle-class family spending a month in jail? It has crushed her morale completely”, he said in an interview with SpotEYe.

“She was withdrawn and quiet. Didn’t speak much. Can’t blame her after what she has gone through. Let the heat and dust settle down. I’m sure Rhea will have a lot to say,” he added.

Amitabh Bachchan Wrote A Heartfelt Note In The Memory Of Rishi Kapoor
Priyanka Chopra Jonas Thanks Husband Nick Jonas For The White Tiger Praise And The Wine, Writes ‘Best Husband Ever’; Post Inside
Kangana Ranaut’s Sister Calls The Taj Mahal ‘Creepy Grave And Not A Symbol Of Love’ Gets Bashed By Netizens
Video From Sushant Singh Rajput’s Prayer Meet At Patna By His Family, Remembering The Late Actor