Actor Rhea Chakraborty is slowly slipping into her regular life. Rhea, who was arrested in September for her alleged involvement in a drugs case, was seen enjoying company of her friends at a party recently.

Rhea attended the birthday party of VJ Anusha Dandekar. She joined actor Farhan Akhtar, his girlfriend Shibani Dandekar, Roadies judge Rajiv Lakshman and others at the party. Rajiv even shared two pictures with Rhea, calling her ‘My girl’. Rajiv’s wife Susan shared a group picture from the party, showing all those who had attended.

Rhea was seen in a stylish suit with knee high boots. She smiled and posed with Rajiv for the pictures and was seen without any makeup. Earlier this week, Rhea and her brother Showik were seen visiting a house in Mumbai. They are reportedly looking to move out of their home. 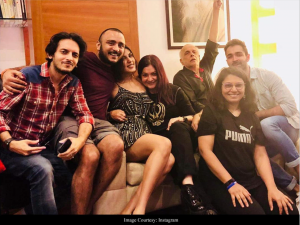 The Narcotics Control Bureau (NCB) had alleged that Rhea and Showik used to facilitate drug deliveries and payment through credit cards, cash and other payment gateways. Showik had appealed for bail several times in the past in a special court and as well as in the Bombay high court which got rejected.

In an interview to SpotBoye, filmmaker Rumi Jaffery, who worked with actor Rhea in her upcoming film Chehre, said that the time she spent in jail has broken her. “It has been a traumatic year for her. Of course, the year was bad for everyone. But in her case, it was a trauma on another level. Can you imagine any girl from a well-to-do middle class family spending a month in jail? It has crushed her morale completely,” he had said. “She was withdrawn and quiet. Didn’t speak much. Can’t blame her after what she has gone through. Let the heat and dust settle down. I’m sure Rhea will have a lot to say,” he had added. 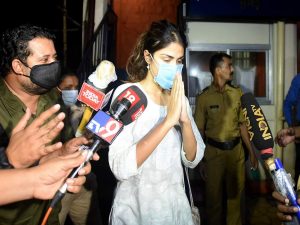 In another interview to Mid-Day, he said he was confident that she would come out of the dark space. “I am confident she will get through this phase. Everybody around will advise you to be brave, but only the one going through [the ordeal] knows how difficult it is. Time is the best healer; with time, she will be fine. She is a talented artiste and will be ready to bounce back,” he said.

Happy Birthday Sonam Kapoor:Arjun Kapoor,Swara Bhasker, Masaba Gupta And Others Shower Her With Love!
Neha Kakkar Gets Trolled For Being ‘Number One’, Says People Are Jealous Of Her
Sushant Singh Rajput’s Kedarnath Director Reveals “He Was Lost As Everything Revolved Around Sara Ali Khan”
Saif Ali Khan Reveals He’s Been A Victim Of Nepotism, “Somebody’s Dad Has Rung Up And Said Not To Take Me In The Film”