Joe Biden was sworn in as the 46th President of the United States on January 20, 2021. In what can be termed as a

historical change, Kamala Harris was also sworn in as the Vice President alongside him at the US Capitol building. Both Biden and Harris were accompanied by their better halves Jill Biden and Douglas Emhoff to the inauguration. Moreover, Harris who is a former California Senator became the first-ever woman to hold the position of Vice President. 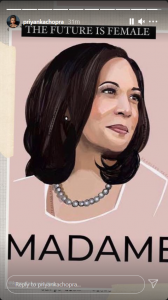 As soon as the inauguration ceremony commenced, millions of people including celebs sent congratulatory wishes to both political figures. For instance, Priyanka Chopra Jonas shared a sketch of Kamala Harris on social media and wrote, “The future is female.” Apart from that, former Miss Universe Sushmita Sen wrote, “Congratulations UNITED States of America!! Making History on so many levels, Respect Madam Vice President @kamalaharris It’s beyond empowering!!! The world needs a strong sense of inclusion & hope Mr. President @joebiden Here’s praying we all find strength in each other…beyond geography!! “We lead not by the example of our power, but by the power of our example” Regards & Respect from India.” 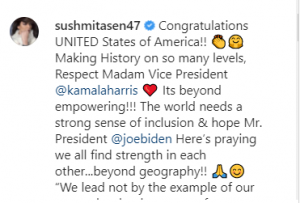 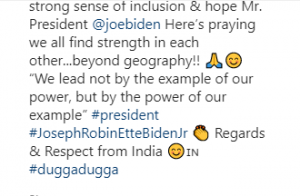 Among others who rooted for the new President and the Vice President of the United States is Swara Bhasker. The actress wrote on Twitter, “United States of America, you did good!” Meanwhile, Richa Moorjani of Never Have I Ever fame wrote a quirky note and congratulated Kamala Harris on her win. Apart from that, South actress Trisha Krishnan could also be seen celebrating the historic win a glimpse of which she shared on her Instagram handle. 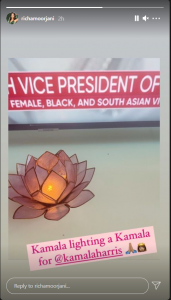 United States Of America, you did good! 👏🏽👏🏽👏🏽👏🏽 🇺🇸 pic.twitter.com/YnKbMxMPc5 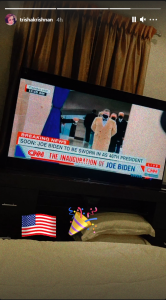 At the ceremony, Biden offered a message of unity and restoration to a deeply divided country reeling from a battered economy and a raging coronavirus pandemic that has killed more than 400,000 Americans. Standing on the steps of the U.S. Capitol two weeks after a mob of then-president Donald Trump’s supporters stormed the building, Biden called for a return to civic decency in an inaugural address marking the end of Trump’s tempestuous four-year term.

Kamala, the daughter of immigrants from Jamaica and India, became the first Black person, first woman and first Asian American to serve as vice president.