Nushrat Barucha, the actress who is known for her acting in the Pyar Ka Panchnama series and Sweety Ke Teetu, made it to the headlines a few days back. She was attending the Filmfare Award 2020 and decided to don a rather revealing dress. While it looked completely covered on the top, it was the bottom slit that dragged her into controversies. The slit was not just thigh-high, rather it was till her waist and the dress was attached by two leather straps to keep it in place. While many people lauded the actress for pulling off this risky dress, there were many others who trolled her for the slit. 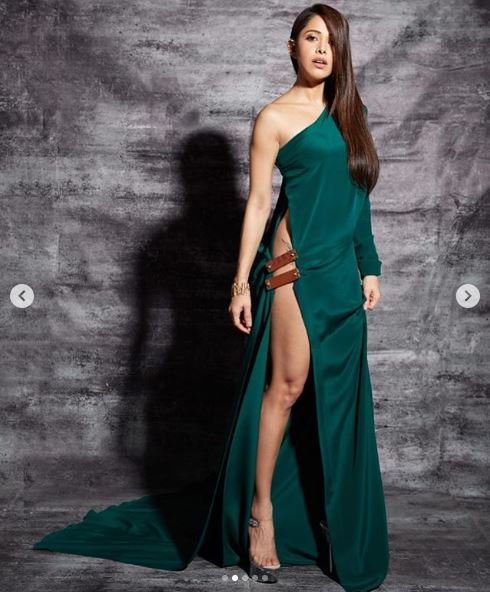 She was recently interviewed by Times Of India where she talked about the controversy that surrounded her dress for the high slit. She said that all the praises she received for the dress is giving her a pat on the
back as she is able to connect with a certain audience. “It just gives me a lot of more confidence to kind of do more such looks, to kind of push the envelope where I feel it and where I would like to.”

Talking about the outfit, she said that she was not nervous. “I think I knew very well as to what I was wearing and how I needed to carry myself, what was the right kind of walk or pose or just to be very careful as
to not… so I knew it. I don’t think I was nervous.”

She added that she would like her opinion and voice respected as well. “The fact that I’m wearing an outfit like this is also a voice of mine saying ‘this is who I want to be and this is what I want to do’ and I would like that to be respected. So honestly, I don’t get affected,” she said.

“Why Talk About My Husband Being A Divorcee? I’m Not A Virgin Either” Neha Pendse Reacts To Husband’s Failed Marriages
Indian Idol 11 Host Aditya Narayan To Tie The Knot With His Gf This Year, Neha Kakkar Has Just Dropped A Bomb; Deets Inside
Bigg Boss 13 Exclusive: Khabri Reveals The Names Of Top 3 Contestants
Amitabh Bachchan Wrote A Heartfelt Note In The Memory Of Rishi Kapoor