Kiara Advani and Shahid Kapoor starrer ‘Kabir Singh’ was one of the major hits of 2019. Despite facing criticism, the film did splendidly well and Kiara and Shahid’s chemistry on screen was one of the reasons why the film was so loved. After the film, both co-stars became good friends and they never shy away to show their love for each other. 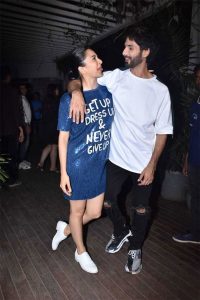 On the contrary, Kiara who is very much active on social media took to her Instagram to wish her dearest co-star Shahid Kapoor on his 40th Birthday. Kiara uploaded a BTS video of Shahid Kapoor from the promotions of ‘Kabir Singh’ and it is super funny. Shahid can be heard saying ‘Kabir is on a Detox man’ in the video. The actress also added a sweet birthday note too which read “Happppiest birthday SK! @shahidkapoor” along with a heart emoji. Have a look:

On his special day, Shahid’s family, friends, and fans have flooded the internet with lots of wishes.

Shahid’s little brother Ishaan Khatter, who is currently filming his next project ‘Phone Bhoot’ along with Siddhant Chaturvedi and Katrina Kaif also took to his Instagram to wish his big brother. Sharing a ‘then and now’ picture ,Ishaan penned a heartfelt note, “Zindagiiiiii kaisi hai paheli haaye. Kabhi toh hasaaye, kabhi yeh rulaaye. But through it all.. I’ll always love you, bade bhai. Happy birthday. ”

As for work, Shahid is currently filming a web series that also stars Rashi Khanna and is helmed by Raj & DK. He will also be seen in ‘Jersey’ opposite Mrunal Thakur which will reportedly release on Diwali 2021.