The royal couple of Bollywood Kareena Kapoor Khan and Saif Ali Khan were spotted making a colorful splash in the city as they stepped out for a movie date. From dating to now being married for almost eight years, the couple has been snapped at various occasions being by each other’s side and complementing each other time and again. 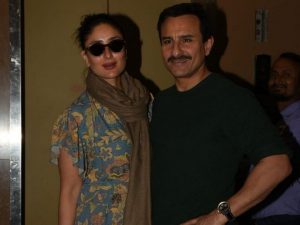 Whenever the Royal couple of Bollywood Kareena Kapoor Khan and Saif Ali Khan step out in the city, they ensure the camera lens wild and crazy, hence, their recent spotting was no exception. We have seen the couple getting spotted on various occasions, be it a dinner date, play date or party with friends date. Sometime back, the couple was spotted at an ad shoot where the two made a stylish entry, leaving everyone in ‘awe.’ Last night, Saifeena was spotted at a popular cinema hall in the city as they step out to watch a movie. Well, this time was a movie date for the two. Saif and Kareena made a colorful splash outside the cinemas where the shutterbugs were waiting with their cameras ready to capture the actors. 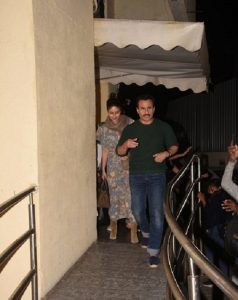 Earlier, in
an interview with Humans of Bombay, Kareena had talked about how love brewed
between her and Saif. She had shared, “When I thought I was falling, Saif
caught me. I’d met him before, but while we were filming Tashan, something
changed. I wore my heart on my sleeve! He was so charming; I fell for him hook,
line & sinker. I remember while shooting in Ladakh & Jaisalmer, we’d go
on long bike rides for some alone time. We’d enjoy the beauty, have great conversations
& just bond!” 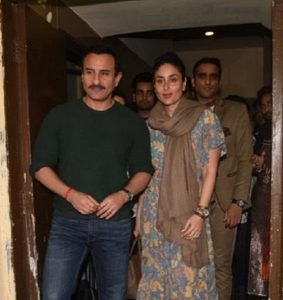 Meanwhile,
Kareena is riding high on the success of her latest outing ‘Good Newwz’.
Talking about Saif, his performance in ‘Tanhaji: The Unsung Warrior’ was quite
praised by the audience. The film saw that the actor turn a shade dark to play
Mughal general Udaybhan Rathod, opposite Ajay Devgn’s Maratha Subedar Tanaji
Malusare.

He will star
next in Nitin Kakkar’s ‘Jawaani Jaaneman’ with Tabu and debutant Alaya F. The
film will hit the theatres on February 7.

Bigg Boss 13 Exclusive: Shehnaaz Gill Angrily Storms Out Of The Press Conference After An Uncomfortable Question On Sidharth Shukla & Her Equation; Check Out
Sara Ali Khan Has Opened Up About Nepotism Debate; Says ‘Didn’t Choose To Be Saif Ali Khan And Amrita Singh’s Daughter’
Vikas Gupta Reveals Sushant Singh Rajput Said No To YRF Because Of The ‘Mad Girl’ Ankita Lokhande, Was His Shock Absorber
Paras Chhabra And Mahira Sharma All Set To Get Married? Wedding Cards Leaked