So as director and producer Karan Johar aged one more year with ringing in his 48th birthday yesterday, wishes poured on social media from his friends and family. Even though there’s no chance of organising a party or throwing a birthday bash with the persistent lockdown that’s proving to be a handful, there are a hundred million ways to make the people close to you feel special. 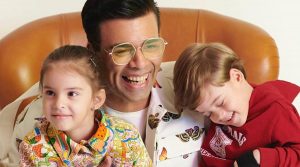 So when the news that the ace producer and filmmaker celebrated his special day with his two adorable twins; Roohi and Yash and his mother, Hiroo Johar, in the comfort of his home surfaced the media, his fans were all eyes and years to see how the celebration took place.

Sharing a glimpse of his birthday celebration on his Instagram handle, the producer made sure to give his fans what they wanted. Though it was karan’s birthday, the people who stole the show were his two little munchkins. Posting a video where the Johar family was seen blowing candles and cutting his birthday cake, Karan showed how extremely adorable his kids are. Not only did they blow Karan’s candles on his yummy looking cake which was in the form of the letter ‘K’, they were the ones who tasted it before the birthday boy. Right after greeting their dada in their cute voices by singing him the birthday song, they did one thing that nobody was expecting them too. They posed an objection on Karan eating his own cake. Their reason; he will get fat.

Check out his video!

Sharing the video on his Instagram, Karan captioned it as, “Birthday love !!! #lockdownwiththejohars #toodles.”

Meanwhile, Anil Kapoor shared the most entertaining throwback video wishing Karan Johar on his birthday. A video of him getting offended with Karan and Shahid for calling him a senior actor. Along with it, the actor wrote, “Mere bhai, mere dost, mere buzurg…Tumhari umra ka lihaaza karte hue I will refrain from pulling your leg (today)! Happy Birthday @karanjohar!! If anyone can turn sadness into joy, it’s you. So here’s hoping you can work your magic on 2020, for your sake and ours.”

Anil Kapoor Opens Up On Nephew Arjun Kapoor’s Relationship With Malaika Arora
Sushant Singh Rajput’s Kedarnath Director Reveals “He Was Lost As Everything Revolved Around Sara Ali Khan”
As Alia Bhatt & Ranbir Kapoor Move Into Live-In During Lockdown, Families Set December Wedding Date?
Here’s What Ranbir Kapoor Had To Say About Cheating On Deepika Padukone, “Why Be Committed?”