Kangana Ranaut has been open and vocal about the ills of the entertainment industry and Bollywood. She spoke up for Sushant Singh Rajput and even wanted to expose the drug mafia once the drug angle was unveiled. She was threatened from entering Mumbai and even her office was demolished. She was so pissed that she even called Bollywood a ‘Gutter’ and claimed that 99% of people in Bollywood consume drugs. Not only Kangana, but actor and BJP MP Ravi Kishan had also said, ‘drug addiction is in the film industry too.’ However, this hasn’t gone well with the veteran Bollywood actress and Samajwadi Party MP Jaya Bachchan.

Condemning Kangana Ranaut and Ravi Kishan’s statement about Bollywood consuming drugs, Jaya Bachchan raised a Zero Hour notice in Rajya Sabha. On the second day of the Monsoon Session in Parliament vetran actress and  Samajwadi Party MP Jaya Bachchan said  it is a ‘conspiracy to defame the film industry’. According to ANI, Jaya Bachchan said in Parliament, “People in the entertainment industry completely disagree. I hope that the government tells such people not to use this kind of language.”

She further added, “Just because there are some people, you can’t tarnish the image of the entire industry. I am ashamed that yesterday one of our members in Lok Sabha, who is from the film industry, spoke against it. It is a shame.” 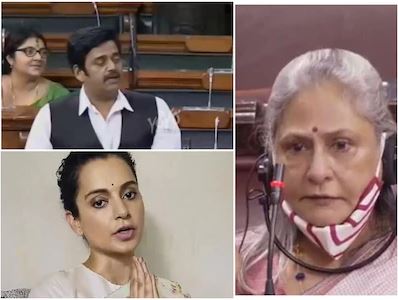 For those who don’t know, Ravi Kishan had said, “A conspiracy is being hatched to destroy the country’s youth and our neighbouring countries are adding to it. The smuggling of drugs from Pakistan and China is being carried out every year. It is being brought via Punjab and Nepal. Drug addiction is in the film industry too. Several people have been apprehended. The NCB has been doing very good work. I urge the central government to take strict action against the culprits soon. Give them a befitting punishment and bring an end to this conspiracy by neighbouring countries.”