Malaika Arora and Arjun Kapoor’s Valentine’s Day celebrations looked like a page out of a fairytale. On February 14, the couple caught up over a romantic dinner with a scrumptious spread, glimpses of which they shared on their Instagram stories. Arjun Kapoor, it appeared, couldn’t take his eyes off girlfriend Malaika Arora – he shared a few photos of Malaika, clicked amidst a dreamy, romantic setting. Malaika was stunning in a white, flowy dress, while Arjun was casually dressed for the night. Candles, roses and dramatic lighting made Arjun and Malaika’s Valentine’s dinner a magical affair. 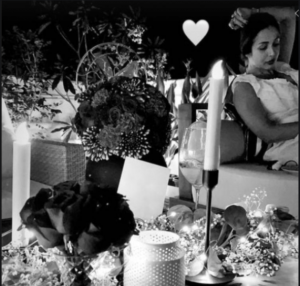 Malaika Arora and Arjun Kapoor made their relationship Instagram official on the Panipat actor’s birthday in 2019. She referred to Arjun as “my crazy, insanely funny and amazing Arjun Kapoor” in her post. In Mumbai, Arjun Kapoor often accompanies Malaika Arora to family get-togethers at her mother Joyce Arora’s residence.

Arjun Kapoor has also hung out with Malaika’s son Arhaan, catching up with him on lunch dates and dinner outings. On New Year, the couple partied together and then sent the Internet into a tizzy with this stunning photo. 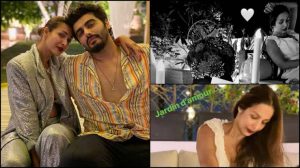 The two kick-started the Valentine’s Day celebrations a day before. Malaika took to her Instagram Stories to share a glimpse of Arjun wearing a black tee with ‘Love is in the air’ printed on its back.

Malaika and Arjun have been dating for a few years now. Talking to Filmfare in an interview, about their decision to make the relationship public, Arjun had said, “We’ve come out because we feel the media has given us dignity. There’s a certain understanding the media has… they’ve been respectful, kind, honest and decent about it. That is why I felt comfortable. You recoil when there’s a certain ‘gandhagi’ that comes with the territory. When purposely people irk you by saying, writing or asking things… there hasn’t been any of that,” he said.