Mehul Choksi, a famous businessman known for money laundering and criminal conspiracy, absconded from India is currently facing investigations from the Crime Branch of India (CBI).

Mehul Choksi and his associated business Geetanjali Jewellery, was reported by Punjab National Bank for fraudulent Letters of Undertaking which led to severe losses of around 14 thousand crores to the bank itself. Choksi was booked under the Indian Penal Code and Prevention of Corruption Act.  Nirav Modi, nephew to the accused is connected to the criminal conspiracy as well.

Fleeing from Indian authorities, Choksi fled to Antigua to avoid criminal proceedings much before his crimes were reported. Once the charges were filed by the bank, he escaped from Antigua. This resulted in a manhunt to catch and deport him. Sources state that Choksi escaped secretively by boat to Dominica. 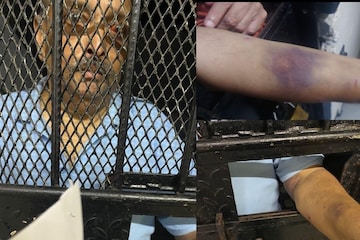 While the accused assumed that he could return to Antigua, the authorities have denied him entry leaving him stranded with the Dominica authorities. In a rush, the Indian government filed deportation paperwork to bring him back. While Choksi has some residency in Antigua, by illegally entering Dominica he lost his chance at avoiding deportation to India.

On being caught in Dominica photos of the accused have surfaced sending media sources in a frenzy. Choksi is seen in jail clothing behind bars with some facial injuries including what looks like an injured eye and bruise marks on his hands. These are the first photos of the accused surfacing after him fleeing from the country.

There is no clarification as to the sources of the injuries and could be speculated were a result of his fleeing in a boat. The Indian authorities have arranged a chartered jet to bring back Choksi from Dominica. The flight took 20 hours to reach and is now in the hangar waiting to bring back the accused to Indian shores. Due to the current covid situation, court proceedings in Choksi’s case have been delayed but this new development will definitely spur some commencement.