Nick Jonas is the biggest cheerleader of his wife Priyanka Chopra and he does not leave any opportunity to show it. Being his wife’s biggest fan Nick is really excited about Priyanka’s latest achievement and literary creation ‘Unfinished’, a memoir. 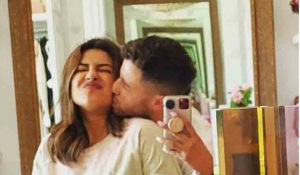 Priyanka Chopra Jonas is all over the news globally for many days with promoting her two Netflix films, a brand new haircare line, and now her own memoir. And she is not doing that alone her husband and pop star Nick Jonas has been on his social media not shying away from cheering her wife with cheeky and adorable posts.

The ’Jealous’ singer took to his Instagram stories to share a lovely image of him holding a copy of her wife’s Priyanka Chopra’s memoir. Nick captioned the image with ‘Let’s Get It @priyankachopra’ with a side note ‘Can you please sign this for me’. With this, we can really say that Nick Jonas is the biggest confidante of Priyanka Chopra Jonas as he cheers all the way from America for her wife who is living in the United Kingdom right now. 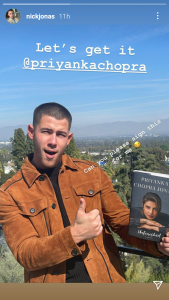 Priyanka Chopra is also not leaving any scores behind on her PDA with her husband Nick Jonas. She reposted Nick’s story on her Instagram and wrote “hahahahha Babuuuu! I love You and yes yes yes! @nickjonas”. 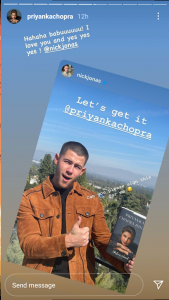 In her recent interview on The Tonight Show with Jimmy Fallon, Priyanka Chopra told Jimmy “Nick is just like my father. My dad is my biggest cheerleader, he would be the loudest person in the room if ill is getting an award or I’m performing on the stage. Sometimes we had to calm him down he rooted so much. Nick is exactly like that way”.

Priyanka has revealed a lot about her private life and some major & pivotal incidents of her journey in the entertainment industry in her latest book.