As lot of voices have been raised by celebs across the globe in support of the ‘Black Lives Matter’ in the US post the death of former footballer George Floyd, many Bollywood stars also came forward to show their support. 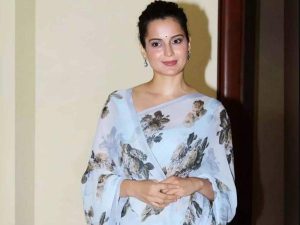 When kangana’s name was mentioned in a Twitter thread that went viral, where a  user asked people to name actors from India and Pakistan who have never endorsed any skin lightening products, an interview with the talented actress seemed the best option to know more about her opinions on the same.

This is a genuine question – can you name me Bollywood/Pakistani stars who have never endorsed a skin lightening product?

So when the BBC interview took place, Kangana called out the glaring gap between how people in the industry stay mum when such incidents happen in the country but go all ballistic when it comes to the west. Talking about the same she said, “I think it has become fancy somehow to be a part of something which is relevant to the West. But Asian celebrities and actors are very impactful in this part of the country. I don’t know why they’re participating in the socio-political reform of America and a few weeks ago when two sages were killed openly in by a bloodthirsty mob and were handed over by cops themselves, there was not a word from anyone, because I think that would probably resonate with the majoritarian sentiment.”

Furthermore, speaking on the deeply Rooted Racism that runs in the industry, Kangana pointed out, “The Indian celebrities they’ve been endorsing all kind of fairness products and today shamelessly they stand and say black lives matter, I mean how dare they? Our industry even shies away from casting darker actors for characters that are supposed to be fair-skinned. Why is no one asking them about these million-dollar deals that they’ve been doing with all kind of fairness products and how come suddenly all black lives matter because racism is deep-rooted and when you have commercialised such events that is the lowest humanity can hit.”

Been refusing ever since I was a VJ till now. Never endorsed a skin lightening product. https://t.co/uGB1vPyaGX

Paras Chhabra Opens Up On Bigg Boss 13 Stylist’ Allegations,“It Was A Barter Deal, I Don’t Know Why Are They Asking For Money”
Netizens Mercilessly Trolls Malaika Arora For Making Laddoos; ‘Naha Toh le Drama Queen’ Says Netizens
Sonali Bendre Opens Up About Positive Stories That Helped Her Amid Lockdown; Says”Brought me out of the darkness”!
Why Shahid Kapoor Became A Vegetarian; Thanks To Someone Special !