Saif Ali Khan is all set to take the small screen by storm yet again as his next series Tandav releases this Friday. The actor, who announced his arrival in the web streaming space with Sacred Games, will be seen stepping into the shoes of a politician. The Tandav trailer also gives a glimpse of the intense political game that is in play along with a stellar star cast. Turns out, Saif opened the doors of his Pataudi Palace for Tandav. 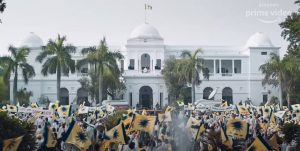 In the trailer, we get to see the actor stepping on to the balcony of the Pataudi Palace to greet his party workers and followers. Revealing that he is nervous about filming inside the palace, Saif told Mid-Day, “I don’t mind giving it for shoots sometimes because it remains unused 340 days of the year.”

He added, “These days, film crews have become responsible and look after the venues, but (the idea of a shoot) still makes me nervous. Usually, I am more comfortable if they are filming around the exterior of the palace. But for Tandav, I made an exception (by shooting inside).”

Speaking about playing a privileged politician in Tandav, the actor pointed out that the casting was bang on. “I have grown up in a very privileged section of New Delhi, I understand that. If you’re asking me to play a privileged prince of a politician, a lot of that will come naturally to me because of the way I’ve been brought up . . . It’s pretty good casting,” Saif told Financial Times in an interview. Tandav releases on 15 February on Amazon Prime Video.

The trailer of ‘Tandav’ takes viewers behind the closed, chaotic corridors of power and politics of India.

Pictures Inside: Suhana Khan Raises The Temperature With Goofy Expressions
Happy Birthday Sonam Kapoor:Arjun Kapoor,Swara Bhasker, Masaba Gupta And Others Shower Her With Love!
Sushant Singh Rajput’s Sister In MS Dhoni, Bhumika Chawla Pens Down An Emotional Note After 20 Days “Still Wake Up Thinking Of You”
Rishi Kapoor’s Uncle Prem Chopra Says ‘I Called Up Neetu, She And Ranbir Have Taken It Bravely’