Dia Mirza has recently tied the knot to businessman Vaibhav Rekhi on February 15 and we couldn’t be happier for the newlywed couple. Their wedding is making a lot of headlines these days as the couple looks dreamingly perfect together in their latest wedding photographs. But other than that there is one more special reason why Dia Mirza’s wedding is the talk of the town. 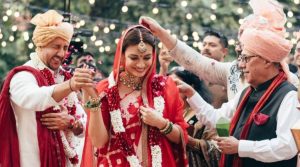 The ‘Rehna Hai Tere DIL Me’ actress went ahead with her wedding in a traditional but not so traditional way. Dia took to her social media to reveal that her wedding was conducted by a lady priest and she feels really proud and happy about the fact. She wrote, “Thank you Sheela Atta for conducting our wedding ceremony. So proud that together we can Rise up.” On Instagram, she penned an emotional note about how happy she feels the joy of having a wedding in such a beautiful way.  “It was such a privilege and a joy to be married this way! We do hope with all our hearts that many more couples make this choice. For it is a woman’s soul that contains love, wonder, benediction, magical energy, tenderness, and deep empathy for all that lives”, she wrote.

Thank you Sheela Atta for conducting our wedding ceremony. So proud that together we can #RiseUp #GenerationEquality https://t.co/aMZdyEZRdF pic.twitter.com/BeyFWCSGLw

Soon after her post, the internet was awestruck by the picture shared by the actress in which the woman priest was seen in front of the holy fire the same place where most of the time we see men performing.

But this is half of the story, the actress was also lauded for challenging more previous patriarchal traditions. Dia Mirza chose not to perform ‘Kanyadan’ and ‘Bidai’ in her wedding which is apparently regarded as some of the important rituals in a Hindu-Indian wedding. She shared this information on her Instagram post in which she wrote, “We said NO to ‘Kanyadaan’ and ‘Bidaai’ change begins with choice doesn’t it?”. Making a statement on the position of a woman in contemporary times Dia also wrote, “It is time for women to own their own agency, their divinity, their power and to redefine what is old and birth what is new”.

To put more emphasis on the issue of gender indifferences Dia Mirza added the #Generation Equality which was the theme of last year’s International Women’s Day 2020’ given by United Nations Women. It’s also a campaign to realize and create awareness about women’s rights and equal opportunities.

Sushmita Sen, Rohman Shawl, Renee & Alisah Make For A Picture Perfect Bunch In Latest PHOTOS From An Outing; Images Inside
Katrina Kaif Unveils Dark Hidden Secrets Of Ex-Boyfriend Ranbir Kapoor, Does Alia Know About Them?
Kanika Kapoor Gets Discharged From Hospital After 6th COVID-19 Test Results Negative
Sushant Singh Rajput’s Friend Confirm The Actor Did Not Have Any Trouble With Work Or Money