The teaser of Kartik Aaryan’s Dhamaka is out and the actor has us surprised and shocked with his character. He plays a journalist Arjun Pathak in the film, where he plays a Television host for a show named Bharosa 24/7. The film is directed by Ram Madhvani and will be an OTT release, and fans will be able to see it on Netflix.

Talking about the film, Kartik said that the experience of working with Ram Madhvani allowed him to ‘explore and showcase a new facet of my personality’. “Dhamaka has been a very exciting & enriching experience for me as an actor. Working with a maverick like Ram Madhvani has allowed me to explore & showcase a new facet of my personality. I am thrilled that the film will reach audiences & my fans all around the world on Netflix,” the actor said in a statement.

In the Dhamaka teaser, we enter a tense newsroom which is in the middle of a major news coverage and its star anchor, our protagonist Arjun Pathak, played by Kartik Aaryan, has lost his nerve. He  plays a news anchor, who is struggling to pull himself together but his colleague, played by Amruta Subbash, forces him to perform and do his best. 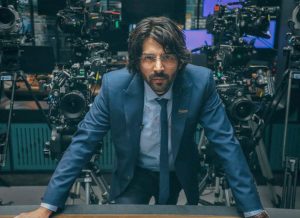 The actor has previously wowed us with his quirky and funny andaaz but this time, in Dhamaka, fans will get to see him in a never seen before avatar. With this, Kartik is sure to prove that he is a versatile actor and Dhamaka will pave a way for him to get roles that are from genres different than what he has already tried before. Apart from Dhamaka, Kartik will be seen in Bhool Bhulaiyaa 2 as well with Kiara Advani. He is shooting for the same in Manali.