An outbreak of avian influenza or bird flu is rapidly spreading across India, with at least nine states confirming cases and others awaiting test results as they put containment measures in place, officials and media reports said.

The latest to confirm cases are the capital, New Delhi, and the western state of Maharashtra, Indian media reports said on Monday. New Delhi has closed the Ghazipur wholesale poultry market, the biggest in the region, after nearly 200 birds, mostly crows, were found dead.

Visitors have been barred from parks with water bodies, lakes and wildlife sanctuaries in the national capital region. An official in Maharashtra on Monday said at least 800 hens died there in the last two days.

“Their samples were given for testing. And now it is confirmed that the reason is bird flu,” Deepak Madhukar Muglikar, a district collector of Parbhani, about 500 kilometres (310 miles) from the state capital Mumbai, told Indian broadcaster, NDTV.

“It has been confirmed in Murumba village. There are about eight poultry farms and 8,000 birds. We have give orders of culling those poultry birds,” he said. On Sunday, authorities in the northern state of Uttar Pradesh shut down a zoo in Kanpur city after the death of four jungle fowls and two parrots. 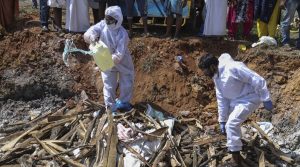 Bird flu affects mainly poultry and wild birds but can infect humans who have close contact with sick birds. Chickens are being culled in Haryana and Madhya Pradesh. Markets and shops selling poultry have been shut for a week in seven Madhya Pradesh cities, a government spokesperson said.

Test reports received late on Saturday confirmed they were positive for the virus, Kanpur district’s chief veterinary officer RP Mishra said. “We are in the process of culling all birds present in all the enclosures and the zoo has been declared a containment zone. It is unfortunate but we are following the protocol,” Mishra said.

The sale of meat has been banned in a 10-km (six-mile) radius of the zoo and a close watch is being kept on all poultry farms and markets in Kanpur district. Samples from dead crows from four other Uttar Pradesh districts have been sent to a laboratory in the central Indian city of Bhopal for testing.

In the southern state of Kerala, the process of culling about 50,000 birds, mostly poultry farm ducks, has been completed in two affected districts, the state’s animal husbandry department chief KM Dileep said. Samples from Rajasthan, Madhya Pradesh and Kerala have tested positive for the H5N8 strain of the virus, while samples from Himachal Pradesh have shown the presence of H5N1.

Skin Care: Use These 5 Essential Oils For Flawless Skin Tone
The Usage Of The Aspirin Is Much Wider Than Using It Just For Diseases
The Best Natural Antibiotic Ever! It Kills All Parasites and Cures Infections in No Time
Sania Mirza Opens Up On Contracting COVID-19; Reveals Scariest Thing She Faced While Battling Coronavirus, Says, ‘Virus Is No Joke’