Sidharth Shukla is making headlines in the Bigg Boss house.
He has been tagged as the angry young man and he is rightly complying to the
tag. While fans are busy speaking their mind on the matter, there are many star
celebs as well that are talking about the show, especially their favorite
inmates. One among them is Dolly Bindra. Apparently, she asked The Khabri, a
well-knows fan page of Bigg Boss that keeps telling spoiler of the show, to
call her and used objectionable language with him. In return, The Khabri
reported her to Mumbai Police after sharing the call recording. 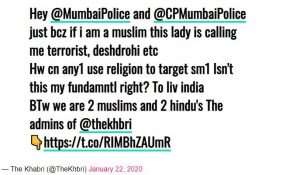 The khabri is fan page of Bigg Boss and enjoys a huge fan
base across all social media platforms. The page is often seen giving spoilers
to the avid followers of Bigg Boss. Right from who will make a wild card entry
to who will be the next contestant to get evicted, the page has even revealed
the name of the winner before the official announcement. According to a report
in spotboye.com, the fan page is managed by Sameer Malik, who’s a civil
engineer by profession and lives in Andheri, Mumbai.

Sharing the phone call, The Khabri captioned it, “So here is
is the conversation @MumbaiPolice @CPMumbaiPolice see how this lady is calling
me terrorist and much more for judt saying she is supporting sidhsrthshukla
Kindly arrest her right now,” “Hey @MumbaiPolice and @CPMumbaiPolice just bcz
if i am a muslim this lady is calling me terrorist, deshdrohi etc Hw cn any1
use religion to target sm1 Isn’t this my fundamntl right? To liv india BTw we
are 2 muslims and 2 hindu’s The admins of @thekhbri.”  Here’s are a few Tweets exchange between the
two: 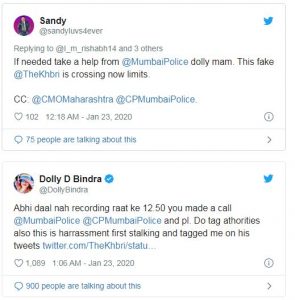 BTW the brawl started when The Khabri tagged Dolly Bindra in
a tweet mentioning that she has been supporting Sidharth Shukla left, right and
centre.