Bigg Boss season 13 has turned out to be the most successful TRP gained show on television, entertaining and nasty fights have made the show gain more popularity and there are no second thoughts about it. The show has witnessed a lot of fights between the contestants. The thirteenth season of one of the most controversial shows “Bigg Boss” is living up to the expectations of its audiences. 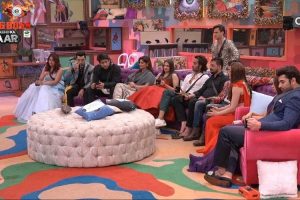 As the thirteenth season is approaching towards its end, every contestant is putting their best game forward to win the show and With every new season the show, Bigg Boss has seen many couples come out from the house, and while some stay together long after the show, some seem to have parted their ways for good. And well, while there are many examples one of the most talked-about couples of sorts in Bigg Boss 13 is Sidharth and Shehnaaz.

Now, we got our hands on an undekhi video, where Shehnaaz Gill is saying that Sidharth lies about his virginity. It started when Shehnaaz, Shefali, Sidharth and Asim Riaz are sitting in the bed room and Asim asks Shehnaaz to ask Sidharth what kind of a girl he likes. In reply of this, Shehnaaz said that he is very secretive and doesnt share anything with her. He won’t even tell about his nomination so obviously he won’t reveal the kind of the girl he likes.

She goes on saying, when once, they were playing truth and dare, Sidharth revealed that he is a virgin and that is a total lie. When he can lie so much then how can you expect him to tell you the kind of girl he likes. Everyone started to laugh after this and then Sana starts to assume he will like a girl like him. She describes the girl as decent and logical like Sidharth. Have a look:

It looks like once lovebirds, Sidharth Shukla and Shehnaaz Gill’s relationship in the BB house is only going downhill from sharing the adorable bond to endless arguments the fights between the two seem no end. Sana has always been very clear and open about her affection and love towards Sid, however, of late, Shukla had been ignoring her.