As the thirteenth season of Bigg Boss is approaching towards its end, every contestant is putting their best game forward to win the show. The popular reality show has managed to keep the audience glued with interesting twists and turns every week. The show witnessed major high points, right from physical fights to budding romance, the whole season of Bigg Boss has provided helluva masala to the viewers. And let’s face it, masala sells.

A singer-cum-actor Himesh Reshammiya will make a grand entry in Bigg Boss 13 house in the upcoming episode of the show. Well, with his fiercely voice, he fires the contestants of the house against Rashmi Desai. As he asks for tea from Mahira, Sid and she could not find the tea leaves and so he calls Rashmi and asks her for the stoles tea leaves. Mahira is seen saying, “Chai chupai gayi hai” and Sidharth Shukla starts calling her ‘chor, chor’. Have a look at the promo:


Well, Rashmi Desai has been grabbing many eyeballs ever since she was locked in the Bigg Boss 13 house. From her ugly fights with ex-flame Sidharth Shukla to her blossoming love with Arhaan Khan, Rashmi has been in the spotlight for personal as well as professional reasons. At the launch of R-ADDA in Mumbai, Rashmi Desai’s ex-husband Nandish Sandhu was asked her stint and whether he has been following her on the show “I’ve been seeing a lot of updates on social media and news articles on it. But unfortunately, I’m not following anyone. I’ve not been able to watch for the last two seasons. I have followed the earlier seasons but I’ve not been able to see this season at all. In fact, I’ve been approached for Bigg Boss earlier”. 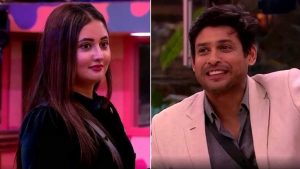 What do you think, will the inmates will make a big deal out of it or let this one pass away easily?