Himanshi Khurana and Shehnaaz Gill have had their share of
rivalry before they even entered the Bigg Boss house. And when the entry of
Himanshi Khurana, as a wild card contestant was announced, it definitely fumed
Shehnaaz Gill. Throughout Himanshi Khurana’s stay inside the house, they kept
mum about this fight but they did give a few references about it.

After coming out, Himanshi did speak about the same and said
that she had wrecked her love life by being the way she is with Siddharth
Shukla. Later, Shehnaz Gill’s father clarified everything and said that such
things are not true and his daughter Shehnaz Gill has in fact been tortured by
her to an extent that she even attempted suicide. 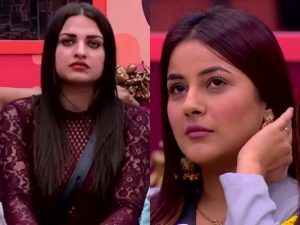 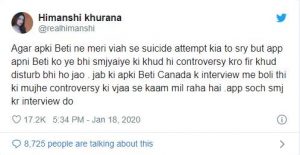 Meanwhile, Shehnaaz Gill’s father Santokh Singh Sukh, in an
interview with SpotboyE revealed, “Himanshi has tortured my daughter to an
extent that she would have committed suicide. After their controversy, whenever
Shehnaaz used to post any picture of her on social media, there used to be 100
comments, 90 were abusive and it was all done by Himanshi’s PR team. Himanshi
was in the industry from 15 years and Shehnaaz that

time was just a
year-and-half old in it. So, this girl used to make sure that she doesn’t get
any work.”