Tough the  premiere of the film,’ Gulabo Sitabo’ featuring the two most prominent names of Indian cinema – Amitabh Bachchan and Ayushmann Khurana, is done today, via Amazon Prime, the Shoojit Sircar directorial has been winning praises from fans on social media. So now, as the film has been released, there is a lot that actor Ayushmann Khurana has to say about working with his dream superstar. 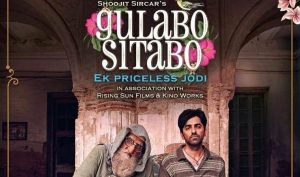 Along with sharing a picture with Big B from a scene in the movie on his Instagram handle, Ayushmann penned down a heartfelt note thanking Shoojit Sircar for fulfilling his wish of working with an ace actor like Amitabh Bachchan. Explaining how whenever a young person in our country wants to step into the acting field, his aim is Amitabh Bachchan, the ‘Vicky Donor’ star wrote, “जब भी हमारे देश में कोई नौजवान अभिनय के क्षेत्र में कदम रखना चाहता है तो उसका ध्येय होता है अमिताभ बच्चन”. Expressing his extreme happiness on working with Big B , he even quoted one of his dialogues from his last film and wrote, “मेरी आख़िरी फ़िल्म में एक dialogue था कि बच्चन बनते नहीं है, बच्चन तो बस होते हैं।”

Ayushmann also wrote about him recalling the memory of how after watching Amitabh Bachchan on the big screen for the first time in the film ‘Hum’, he wanted to become an actor. He not only mentioned the moments that he spend with Big B on the sets of Gulabo Sitabo as a co-star, but also thanked filmmaker Shoojit Sircar for giving him the amazing chance of featuring in one frame with a superhero like Amitabh Bachchan. Further expressing his gratitude, the actor mentioned how he considers Shoojit as his teacher and has been able to reach where he is now with his guidance.