Though there are many actor who met their other halves on the sets of their next big screen hits, there are a few who share very interesting and fascinating stories. One such actress who met her significant other via sets, is B-town celebrity Anushka Sharma, who met her now husband Virat Kohli during shooting for her shampoo advertisement in 2013. Though it has been years since their marriage, the duo remains head over heels for each other . 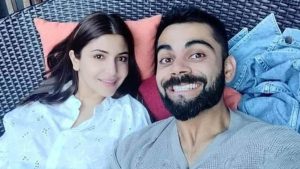 So when the duo showed their exceptional chemistry and fun banter in the new ad film, all the fans were left swooning and in awe. Though the advertisement is about Shyam Steel, a steel manufacturing company, the fans couldn’t keep their eyes off of the amazing on-screen chemistry that the duo displayed during the 40 second ad.

The add which starts with Anushka being confused over what to order for their cheat day, ends on a sweet note with her ultimately ordering Virat’s favourite dish, ‘Chhole Bhatoore’ without his verbalizing so. Yes, a direct pointer towards their strong bond and understanding.

As their chemistry is on point, highlighting the ease at which their conversation flows, fans couldn’t help but point out the obvious. While one wrote, “Doesn’t seem like it is an ad Seems like they are having a real conversation They are the cutest,” another impressed fan commented, “Awwwww ! Their chemistry.”