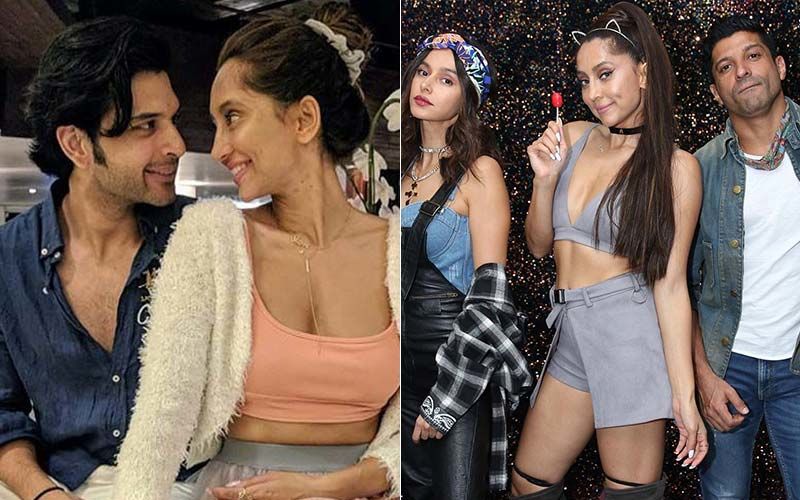 There have been rumors going around that one of TV’s hottest couples Karan Kundra and Anusha Dandekar have parted ways. The two did a number of shows together and had been setting some real couple goals for everyone. However, there are reports that they’ve broken up. While none of them has officially confirmed to the Breakup, Anusha’s latest emotion post hints that the rumors of their break up might be true.

Anusha Dandekar took to her social media and shared some stunning throwback picture with sister Shibani Dandekar and Farhan Akhtar. Anusha in her heartwarming post thanked Shibani, Apkesha and Farhan for their support over the last three months. Sharing the pictures, Anusha wrote, “Shibani, I cannot thank F and You enough for the last 3 months, every single day checking to see if I’ve eaten or I need anything, bringing me groceries every 3 days (yes grapes and Coke Zero count hehe) bringing me snacks just to cheer me up… checking to see if the babies needed food. Never letting me go out and always saying you will go instead, even for the smallest things. You turned from big sister to Muma. And in your own tough love way made sure I was only thinking ahead after finding out everything.” Check out the pictures below:

Anusha further wrote about how she did not feel alone because Shibani and Farhan were there for her. “I wasn’t alone or stuck because of the two of you and I’m forever grateful to both of you for every single day… every single day! And also the many FaceTime calls, where you both gave me live performances, made my heart happy! Love you both from the bottom of my soul! Thankyou Thankyou Thankyou!” she wrote.

Meanwhile, Karan Kundra in an interview with TOI, refuted break-up rumours with Anusha Dandekar. Karan was quoted saying, “Just because we are living separately, people have assumed that we have parted ways. Let me tell you, we are still together. The rumour could also have been fuelled by the fact that I haven’t posted much on my social media handles. Well, that’s because I am on a digital detox now.”